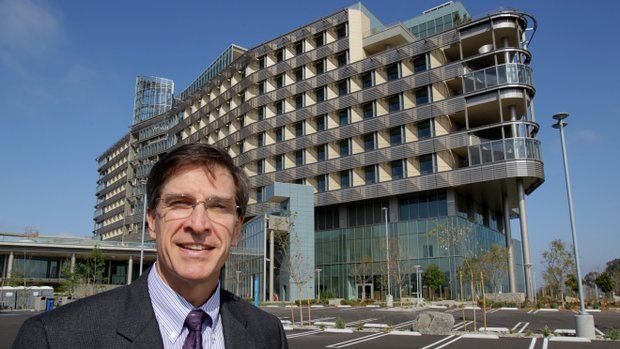 READ THE ORIGINAL STORY THAT RAN ON  MARCH 13, 2012, IN THE SAN DIEGO UNION TRIBUNE.

Gerald Bracht began his career in hospital administration modestly — working in the kitchen of a Pasadena hospital at the age of 13.

On April 9, Bracht will get the keys to the $956 million, 11-story Palomar Medical Center West, where he is chief administrative officer overseeing the newest hospital being built in San Diego County. Palomar West is slated to take its first patients in August.

Bracht has been a leader in the herculean effort by the public Palomar Pomerado Health district to open the facility that sits high on a hill overlooking Escondido.

When it opens, the hospital will take over acute-care services now performed at Palomar Medical Center in downtown Escondido, which then will offer women’s and children’s services, behavioral health, rehabilitation and outpatient care. Clinical outreach officer Sheila Brown will assume Bracht’s role as administrator there.

Palomar West will open with 12 operating rooms, 50 emergency and trauma department rooms, and 288 single-bed rooms and the capacity for 360 rooms in the future.

To create a state-of-the-art hospital, Bracht and PPH leaders, including Chief Executive Michael Covert, have picked the brains of medical experts and futurists, and toured new facilities at Rady Children’s Hospital and Sharp Memorial Hospital in San Diego.

In two weeks, the countdown begins with the start of a complex ballet of staff training, equipment and furniture move-in, medical rehearsals and any final troubleshooting.

In August, Bracht will move to his new office, taking along the hard hat he wore during the hospital’s 2007 groundbreaking and the chunk of steel he saved from the 2009 topping-off ceremony, when the last beam was installed.

Bracht took time from his hectic schedule to answer some questions.

Q: How did you get into hospital administration?

A: I started in health care really early, delivering trays to patients. I ended up doing the buying for that kitchen and eventually for the hospital. From there, I moved to American Medical International as a materials manager, got my degree and worked in their corporate office. I missed the hospital environment and wanted to be more involved in administration, so I got a master’s degree and in 1990 began working as an associate administrator at an El Cajon hospital. Scripps Health later purchased it and moved me to their Encinitas hospital.

Q: You’re opening a $956 million hospital with nearly half the funds coming from property taxes that district voters approved in 2004. What message do you have for those taxpayers?

A: I should start by again thanking the community for responding so positively to the vision for health care they approved in the bond initiative. With a nearly 70 percent approval, it was a tremendous vote of confidence.

Consequently, we take very seriously our responsibility to deliver on that vision. Our CEO challenged us every step of the way to design for the future and not just replace the present hospital. The current Palomar Medical Center, which has been around for 60 years, doesn’t meet the needs of how health care is delivered today. The new hospital does.

Technological advances, research into the healing process, patient and staff safety, efficiency and environmental concerns were all drivers in our planning and construction.

Q: Costs have risen substantially. How has PPH adjusted?

A: We started during a period when the country and the world were in a building boom with rising material and labor prices. To work within the budget, 2½ floors are shelled and will be completed in the future. But we did not want to compromise the fundamental principles we had designed. It’s also important to note that health care in California is heavily regulated and a hospital is one of the most complex and expensive structures to construct.

Q: How is Palomar West different from the existing hospital?

A: The current hospital was built with private patient rooms, clearly an innovation at the time. But the size of those rooms did not consider advancements in medical technology or the desire of families to remain with the patient. Consequently the rooms are smaller, power outlets are insufficient, communication and information systems are different. The new hospital uses an electronic medical record and not a paper record that was the standard for years. This means computers, iPads and smartphones instead of the pen.

We designed the new hospital to be flexible and to be able to accommodate future development in medical technology and medical practice.

Q: What’s been most challenging and exciting with this project?

A: It’s been exciting watching it go from blueprint to reality and to see the entire team effort. The greatest challenge is transitioning from our current hospital to the new one. Our procedures and practices will be different in the new building, so when we get the keys we will begin three months of intensive staff training.