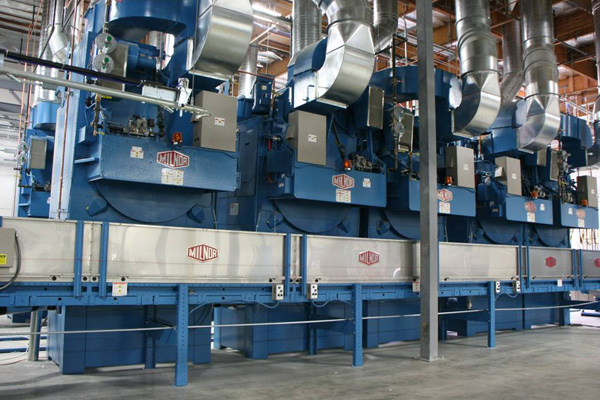 Having corralled most of this area’s largest hospitals as clients, Emerald Textiles is expanding into Los Angeles.

That new business required Emerald to set up a 15,000-square-foot distribution center in Riverside, but eventually the business will build another laundry facility that replicates the one in Otay.

The 77,000-square-foot plant that opened in 2010 is reputed to be the paragon of industrial laundries by those familiar with the field. Citing Emerald’s hired design consultant, Western State Design, Gildred said, “They claim we’re the most technologically advanced, state-of-the-art facility in the United States, and they’re in a position to know.”

Emerald invested about $20 million into the plant that includes highly efficient Milnor-made washer machines that use about a half-gallon of water per cycle compared to older industrial washers that use 1.5 gallons, Gildred said.

Those new machines and other energy-saving systems add up to saving some 40 million gallons of water and more than 750,000 therms of natural gas annually, the firm says.

Because of such modern equipment, Emerald is able to drive down the costs for its customers, which are the area’s biggest health care providers.

“We’ve saved both Sharp (HealthCare) and Scripps (Health) a tremendous amount of money, more than $1 million a year each,” he said.

The environmental and sustainability angle sells well to health care organizations, but the main reason why Emerald continues picking up new customers is its focus on cleanliness.

Keeping hospital bed linens free of any potential infections is something all hospitals must do, and Emerald’s emphasis on that aspect of its operations was apparent from the outset, said Joy Dicey Phillips, administrative director at St. John’s Health Center in Santa Monica, an Emerald client since February.

“It was their technology, the way their warehouse is designed, the quality of their staff, the cost, and their ability to handle our capacity that all factored into our decision,” Dicey Phillips said.

While all vendors had good qualities, what they say and what they look like (from a required on-site inspection) is very different, she said.

In addition to Sharp and Scripps, other major customers here include UCSD Health System and Kaiser San Diego. In all, the company has about 20 customers, but Sharp alone has about 70 facilities using linens.

Emerald’s success isn’t cheered by everyone, least of all some of its competitors.

Angelica Textile Services, a Georgia-based corporation that operates a large laundry in San Diego, alleged that Emerald stole its trade secrets as well as clients in a lawsuit. This year, a San Diego judge not only found in favor of Emerald, in January a San Diego jury awarded it $1.6 million in legal fees from Angelica for filing the case in bad faith, according to court documents. Gildred declined comment.

Gildred and his business partner, Bob Payne, decided to get into the health care laundry line after seeing what the current laundry landscape was like, and realizing what could be done with new equipment.

Payne is the president of Multi-Ventures Inc., a real estate investment and management company, and the former owner of a restaurant chain that included the Old Ox, the Boat House and Hungry Hunter. His name also adorns the School of Hospitality and Tourism Management at San Diego State University.

A call to Payne wasn’t returned.

In its first full year of business, Emerald Textiles did better than $20 million in revenue, Gildred said, declining to reveal recent sales figures. He said the business has been growing at an annual average of 15 percent, which means it did better than $23 million last year.

Gildred also heads up a software business called FMT Consultants, and is part owner of a family business, the Gildred Cos., which owns and manages some 14 light industrial properties in Southern California.

Emerald operations require constant upgrading and investment, says Gildred. “With each new customer, there’s new investment we have to make in equipment and in linen,” he said. “We have to buy new linen because we own the linens, not the hospital.”

And the learning about how to make things better never stops, he says. “It’s been quite a learning experience and I learn every day.”

See the story on SDBJ.com